Mrs S is a 52 year old lady who experienced gradual onset ache at the base of her buttock region, without trauma or incident at time of onset. This corresponded with a period of increased walking duration, which she performed daily as exercise. Pain intensity progressively worsened across a three-month duration, and was most intense while sitting and during the first few steps of the day after waking. Mrs S also experienced pain after walking for longer than an hour continuously, and pain remained elevated for the remained of that day and the following morning. Pain progressed until driving (sitting) was only tolerable for 20 minutes before a break was required, at which point she sought health care assistance.

Mrs S was referred by her regular GP for physiotherapy opinion and management. Objective testing revealed sharp pain localised to biceps femoris hamstring insertion on the posterior inferior iliac spine, and her pain was able to be replicated at this region with resisted hip extension active motion particularly when performed from a starting position of hip flexion (increased compression over the insertion site). Hip and lumbar active range of motion were regular, and nerve provocative testing did not reproduce any symptoms. Objective findings, combined with subjective history, led to a diagnosis of proximal hamstring tendinopathy.

Physiotherapy intervention consisted education for pain-guided load management. Specifically, a pain threshold of 3/10 on a numerical pain rating scale (where 0=no pain and 10=worst pain imaginable) was agreed upon as the limit for acceptable pain during activity before requiring modification or cessation. Additionally, the client was instructed to monitor the delayed response to activity (the morning after activity), and if symptoms were elevated the activity was to be modified to make it easier/less provocative.

The client’s pain tolerance during resistance exercises was assessed; non-compressive (hip in neutral) were targeted to minimise aggravation. The aim of this exercise was to fatigue the hip extensors and knee flexors (and resultingly build strength and activity-capacity), while minimising pain aggravation. Initially, the client was prescribed prone machine-based knee flexion and top-position isometric single leg bridging exercises (figure one), as these were within the acceptable pain-threshold, and were tiring within 10 repetitions and 20 seconds respectively. This was performed every second day. 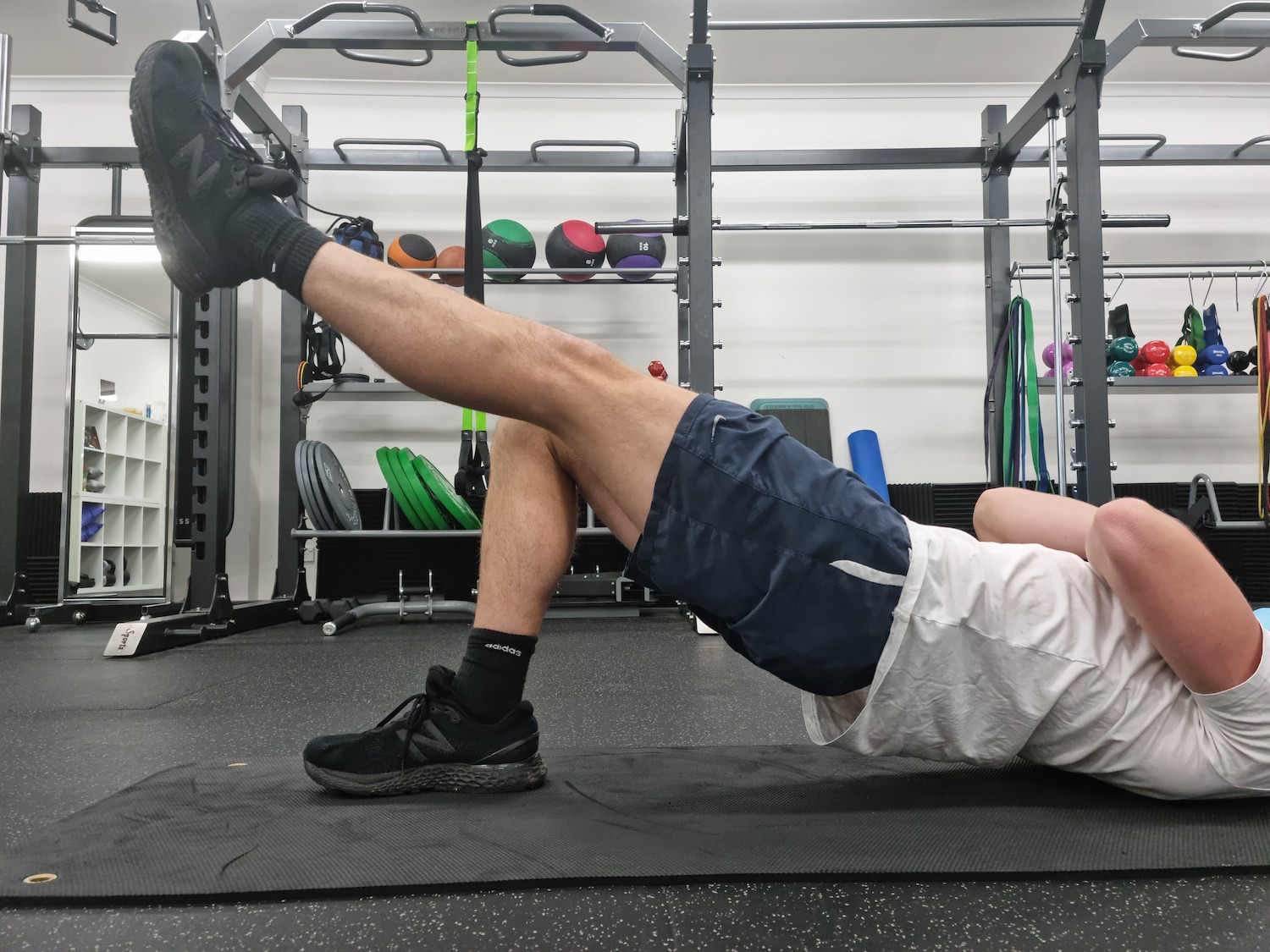 Pain management therapy was also provided to the client, in the form of soft tissue massage to all hamstring muscles (not the tendon insertion site). The client was shown foam rolling exercise, and instructed to use this for relief as required.

Within two weeks, the single leg isometric bridge was comfortable through range (isotonic), and was progressed accordingly. The client was educated on self-progression for the prone machine-based knee flexion exercise, whereby if this activity did not aggravate symptoms (per the pain threshold and delayed pain response established) after four repeats, and fatigue wasn’t being reached, an additional weight plate (2kg) was added.

After 6 weeks, Mrs S reported she experienced no pain with sitting or in the morning. The only aggravating activity was walking for durations longer than one hour, although pain intensity was considerably lower with this activity. Mrs S was instructed to reduce walking duration to the onset of pain (approximately one hour), and to apply the same self-progression principles established for resistance exercise. She continued her resistance exercise, which she reported were pain-free and her strength greatly improved.

After a further month, Mrs S had resumed her pre-injury walking duration without any symptoms during or after.

As is typical of rehabilitation for other lower limb tendinopathy conditions, best current management is considered gradual and progressive resistance exercise that also incorporates plyometrics/energy store-and-release exercise, followed by sports specific training. This should be at the back-end of rehabilitation. Rehabilitation exercise can be pain-guided, limiting pain during activity to mild levels only (approximately 3-4/10), but it doesn’t necessarily have to be pain-free.