Mr B is a 40-year-old gentlemen who presented to Physio and Fitness Clinic following a complex history of right sided Achilles related injuries. This included an initial rupture, which was managed surgically, followed by partial rupture 18 months later – which was not managed by a health professional. As a result, Mr B reported ongoing and significant difficulty with loading activity due to weakness despite over six months passing since the most recent injury. Previously he had participated in social sports, which he refrained from post injury due to fear of re-injury and inability to produce adequate right-side strength and power.

Objective testing revealed greatly reduced right sided maximal dynamic strength – in particular, eccentric strength to the point of not being able to maintain force while lowering from a plantarflexed position while under load ~ 70% concentric 1RM. Additionally, considerable muscle wasting was evident on the right side relative to the left lower limb.

Initial management consisted of prescription of single leg concentric heavy-slow resistance plantar flexor exercise, akin to that used often in Achilles tendinopathy rehabilitation. This was set at 4×8 repetitions, at an intensity of two repetitions in reserve (RIR) – using a weight that, at 8 repetitions, would induce fatigue that would only allow an additional two more repetitions to be completed if required. Exercise mode included bent and straight knee exercise positions, to target both the soleus and gastrocnemii. Mr B also completed assisted (other lower limb) eccentric resistance exercise at an intensity that he could maintain control through range. Additionally, functional isometrics (supramaximal) were prescribed – these are isometric holds at different plantar flexor positions. Mr B was completed this program once per week under physiotherapist supervision, and at least twice a week at home as best able with available equipment. This frequency was prescribed to ensure adequate volume for strength physiological adaptations to occur.

After four weeks of this exercise, eccentric control through range was much improved – Mr B was able to demonstrate slow and controlled eccentric motion under resistance greater than body weight through full range. Accordingly, the eccentric phase was incorporated into heavy-slow resistance plantar flexor exercise. In the same time period, concentric exercise weight had progressed to maintain the two RIR intensity. In addition to resistance based, functional exercise was added that required power and/or control of the ankle plantar flexors. This included sled pushes (power; figure 1) and tip-toe walking (control). 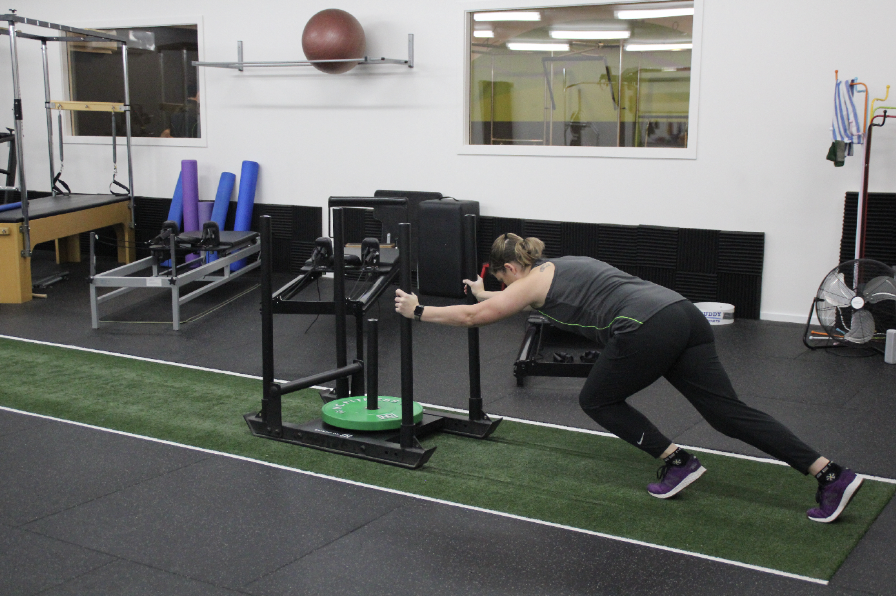 At the time of writing, Mr B has not yet returned to social sport, however he reports improved confidence and reduced disability on the right side. He plans to coach junior sport, and is confident he can participate enough to demonstrate technique to his team!

Plantar flexor deficits are common following Achilles tendon rupture and repair, which may be due in part to elongation of the Achilles tendon (Silbernagel, Steele & Manal, 2012). In particular, heel raise height and maximal strength is often reduced (Silbernagel et al., 2009; Brorsson, Silbernagel, Olsson & Helander, 2018), and these deficits can persist for a number of years after rupture irrespective of whether management is surgical or conservative.